I was walking through the sandwich and wine market near work Wednesday when I saw these on the shelf.

I thought to myself, "Hey, these are just the thing for a Genius on the go." So I tried them out this morning. I was expected some form of cheeto-type snack. I was a little disappointed by the appearance of the smart puffs. Apparently, the target consumer of these alleged food items is the one person in the country who has never seen a packing peanut before. These puffs had the same consistency and basically the same flavor. (The implication that I have tasted packing peanuts is deliberate. More on that later.) I was pretty disappointed because these puffs smelled like good white cheddar cheese but their taste was flat and lifeless. They are just starch with a hint of corn and a spritzing of cheese scent. 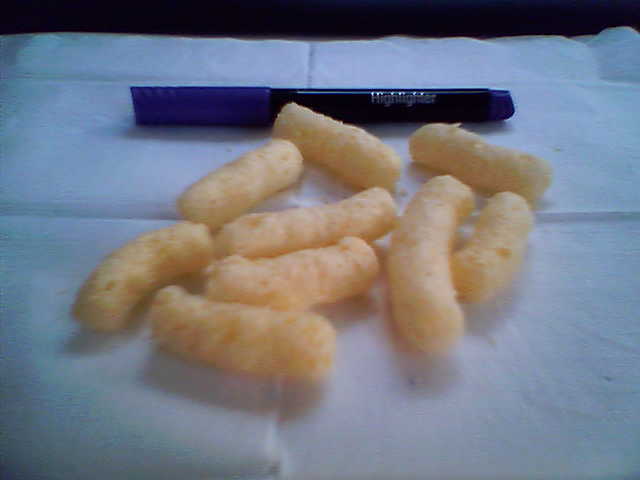 Well, the taste wasn't that horrible. Really it was the lack of crunch and the way they quickly dissolved into a kind of goo in my mouth that I found objectionable. I like chips and the like to be crunchy and not all gooey. Still, the consistency and appearance really ruined the small bit of cheesyness to be enjoyed. It was kind of like eating fried paste with a dusting of dried cheese.

Verdict: Not all things labeled smart are.
Posted by Chuckles at 11:44 AM

Wow, it took a little doing to get that picture to come out right. I am quite proud of myself, given that my two experiences with programming classes were both in Hypercard.

Are you done with the pat on the back?

I was thinking the same thing teh. Our genius minds are thinking alike today!

I inspire millions* in my quest to light the halls of ignorance with my flaming brand of truth.

i think if you were a true genius, you would have known that these were gonna taste like ass. the only smart puff is the one i take the moment i get home from work.

You got see his column on his blog.

i hate the ramones, but if i opened for them i would pimp it til the end of time. then i might put it in my death notice, cos i won't have a tombstone.

Who are you? Jim Morrison?

no, not jim morrison - difference being that my poetry is actually enjoyable.

Now Pop, I was loving you, I mean LOVING you until you dissed on the Ramones. The Ramones and the Sex Pistols are gods and you cannot fuck, you cannot fuck with those bands!

Chuckles, another night of drinking Starbucks and surfing women?

sex pistols - gods indeed. "pretty vacant" is one of the best songs EVER. my fave song by them, however, is "did you no wrong", a rockin' b-side.

as for the ramones - they didn't do anything that the new york dolls didn't do first and better.

PopRen, you know I lurve you and your cooking. Your wife, RockStarette(or whatever) is totally rad as well. I just wanted to poke. I mean, c'mon, CAKE?

Anywhoo. AG, I only drink coffee in the morning. I only surf at the beach, n'est pas? If there is a chucklette, you have yet to met her.

Ahh yes, but they did it longer and harder...

If there is a Chucklette, which would be more like a Chuckiegirl, like Fulsomegirl, bring it. We should get to meet her and WARN her!

What the hell makes you think I would tell any real life girl about all the turing machines I hang out with on the interwebs?

"Ahh yes, but they did it longer and harder..."

I am not a true Turing machine, in that I cannot engage in a conversation convincingly.

So...there was no feeling of genius after you ate them? Bummer. That's the least you could have gotten after having eaten crap.

I felt foolish for having succumbed to the ravages of ego. I shall remember and learn.

Hey chuckles thanks for the zesty new link.

Well I figured I should come over since I took an entire course on 'sub-optimal' purchases. Therefore, I liked your comment on the gray hordes at Lose The Noose. I have "Consider The Boot" too, titled from a discussion we had on Toby Keith and a sales clerk named Assbitch.

Nice to run into Adorable Girlfriend, I saw her at Lew's place and can see why as he is a Ramones fan and we seem to get sidetracked by punk nostalgia (as in my Chelsea Hotel post, derailed to Sid and Dee Dee's weaponry)

I am reminded of High school where my hot but high boyfriend would fight with asswipe numbers two-five about 'Old and New Metallica" and "New York Dolls vs The Ramones" and "Godzilla Versus Fucking Megalon" etc. etc.Sadly, I was in college by the time they got around to arguing over the merits of Beavis and Butthead.

I myself travelled to Jim's grave and dearly love the Ghost Of Leather Pants Past, but when it comes to music sparring, my attention span cannot abide.

Nice to meet you, Chuckles. Bagged snacks are an evolving food form. Give them time.