Every time I drive both of my parents anywhere, I make a mistake.  In 1998, I took over driving so they could both nap in the backseat, and was stopped for speeding as soon as my parents fell asleep.  79 in a 65 in rural New York.  Were we driving on I-90 toward Chicago, I would be in the right lane and most of the other cars would be passing me.

In September, we were on our way to my niece's birthday party and stopped to buy a cake.  The parking lot was the first floor of the grocery store, and it had almost pristine, white support columns.  I made some poor estimations of distance and crunched the passenger side mirror housing.  The mirror itself popped right out of the housing, and was fairly well obliterated.  The housing was basically fine.  I thought about gluing a cheap plexiglass mirror onto the cracked mirror, and then popping that mess back in until we could get a real mirror.  I was overruled.

Our annual inspection is due tomorrow, so of course I spent most of the day driving out to a salvage yard that had a compatible mirror.  It was a nice day, so I got to enjoy some scenery on the old state roads up to the yard.  Two hours and $70 later, I was on my home.

I took a quick look online for instructions, remembering the only previous time I have tried home auto repair and that mess.  I found some helpful pictures at VWVortex, and then proceeded desconstructing my car's door. 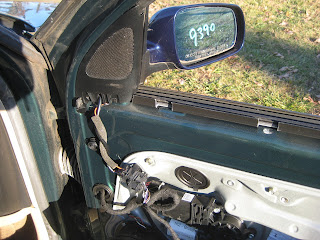 In progress, the mirror is wired. 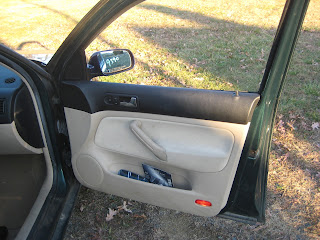 Hey!  Look at that!  The panel actually fit back on! 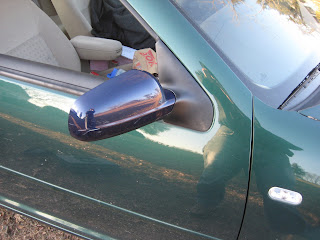 Yeah, the green of the new mirror housing doesn't quite match the rest of the car.

The door is a little scratched up around the handle, and most of the stupidstupidstupidirritatingstupid tabs that are supposed to "just pop right off" are broken, but the speakers work, the window rolls up and down, and the mirror moved with the joystick.  Or it did, until the joystick snapped off while I was carefully adjusting the mirror.

Updated on Friday, November 1, 2012: Technically, the score could be said to be 3 to 2 in VW's favor, since the keyfob battery died about this time last year.  I was able to replace this about a month ago.

In adding insult to injury news: to pass the annual inspection, the car needs new tires, rear brake pads, some flim flams on the woozle wazzle, the right-hand samoflange has sheared from the dimensional moorings, the alluvial calibrators need new dampeners, the inertial compensators have decompensated, and seven of the valves were found to be on backwards.

Email ThisBlogThis!Share to TwitterShare to FacebookShare to Pinterest
Labels: automobile, fucking incompetence, technowizardry, the vein in my forehead is doing that thing again

I Still Have Hope for Videogames

Maybe someday I will finish that article I am working on about how to make a great Fallout Online.
Posted by Chuckles at 9:47 PM 1 comment: