I finally got some crickets for my tarantula, Helob. I only bought five because I was worried about the chirping driving me bonkers again. I read that crickets may be undesirable if you don't feed them. So I cut up some mandarin orange slices and put some of the juice in a dish in the terrarium for the crickets to eat. Then I dumped the crickets in and closed the lid.

Immediately, one of the crickets ran straight to Helob. He grabbed it and was munching away happily until another walked right up to him and poked him in the face. Helob stopped masticating (is that an appropriate verb here?) the cricket and I was worried that he wouldn't eat the rest of them like last time. Thankfully, this was not the case. Helob continued to eat the first cricket after the other crickets stopped harassing him. He also did his dinner dance. This is his weblaying trick where he spins in place and lays a sheet of webbing in a circle. He always does it while munching away on some hapless cricket. The next morning I could only see three crickets and they were all hiding in the furthest corner from Helob. One was even trying to dig into the dirt. Now that's comedy.

As an unrelated topic, it isn't hard to tell that this kid is related to me. 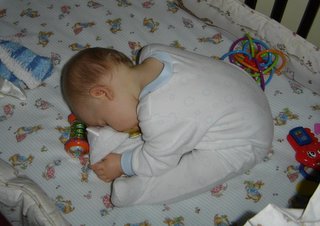 Posting and Pimping the newphew?! Have you no shame!

I thought AG was going to say: "Oh, really? I figured everyone could see the resemblance because you act like a big baby!"

ANyway, are you supposed to put all the crickets in there at once, or feed them too him one at a time?

That is true Teh and like the kid's diaper, he's full of crap most of the time!

You know she abuses you because she's in lust with you, right?

Oh yeah, she is lusting in her heart for me. I bet the UC is burning with jealousy. Just like she is burning for me.

Crickets for the spider....ugh. I'm shuddering just thinking about it.

I love the pictures of your nephew. He is the cutest thing.

Get off the glue!

Linny: I like how he just collapsed in on himself. Like a little star, he he collapsed into the black hole of sleep.

When I was a tiny kid, I used to get into all sorts of odd places and then fall asleep. Like inside chests of drawers. Or on top of book shelves.

I will say that he is very cute.