Today for work I went down to the Omni in Woodley Park to check out an exhibit hall. Work is hosting an event down there in March and we wanted to check out some new fixtures and our layout. Turns out the event was the Gathering of the Wingnuts. I just about shit myself. I spent three hours wandering around the booths and exercising great restraint. I was dressed like I belonged except for one key item. Well, two. I didn't have a visible conference registration, but I was wearing a blue dress shirt.

At first I was surprised. These are the same people that RosemaryEssmay thinks live in the real world. These people champion G.Gordon Liddy and Dick Cheney. These people have cutouts of GWB at 70% life size in their booths. For sale. If the purchase hadn't supoorted some PAC/lobbying group that wants to turn America into a theocracy, I might have bought one of those. I would have then marched out into the center of the hall, by the Lockheed Martin F22 quad booth/flight sim(Making War Like a VideoGame Since Vietnam!), tossed GWB on the ground, ripped his head off, shredded the rest of it and then pissed on the remains. As the multiple film crews taped me being forcibly removed, I would have shouted, "FREELANCE GENIUS DOT BLOGSPOT DOT COM!!!!1!11!!!" and "MICHELLE MALKIN PERPETUATES BOGUS MEMES, COBAGZ!" During my press conference upon my release from jail, I would deliver a concise discourse on how the WRN crew will dominate the 3Bulls! header challenge.

As it was, I walked around and I tried really hard not to glare at them or give them the eye. I openly sneered at the GWB cutout and the boothies noticed. I worried that would start a screaming riot with cries of "BURN THE LIBERAL! DEATH TO DISSENT AND PATRIOTISM!" That would have been pretty cool actually. I would have tossed my coat and manbag aside and issued a mighty warcry. Anybody that came within reach with intent to annoy would have gotten the whole five fingers of doom across the maxilla. Yellow elephants would stampede in fear. I am a furious, funktastic ninja of responsibility and I will strike without warning, bitches. I leap from foe to for like a gazelle or maybe a leopard, clawing and gouging, slaying and slaughtering with bellows of "COBAGZ!" and "CHUNDERMUFFINZ!" perhaps even the occaisonal "LOAFWAGON!" There'd be DNA evidence everywhere. But I didn't.

Anyway. The Ex-gays and had a booth. I thought that was pretty funny, becuase it was kind of lonely looking. The RIAA had a booth space, but no presence. PopRen and I would have burned that mother to the ground and beaten the boothies with dead cats. There was even a 'stop illegal file sharing' booth with no clear name visible. The boothie was hidden behind two televisions showing movies which were both in view of a video camera. I found that hilarious. I asked her about the legality of downloading TV shows. She said that she had no idea but it probably wasn't a good idea given that it was copywrited material. I responded that they beam it everywhere for free. She offered to look it up. I said no thanks, I'll just keep doing it even if it's illegal. The ACLU had a booth. This was pretty surprising, but then it was stuck way off in the far corner and poorly lit. I wandered far and found the booth for PR. Conservatives for the legalization of marijuana. Apparently, we are at war with drugs and conservatives want small government. This reasoning follows the line that conservatives should want to stop this war and cut the funding that isn't stopping the drugs anyway. I was surprised at the logical consistency displayed by the boothie. No one was stopping by him either.

People were mostly hanging off of the two booths that were selling Malkin and Coulters books. People still can't wait to hang off either pair of balls on those two hose beasts.

Did you know that you can buy coffee that is both anti-Fair Trade and pro-Contra all at once? It is called Contra Coffee. I wonder if Oliver North drinks it. I bet he's in the commercials.

I didn't do anything vulgar or mean while I was there. I really let loose at lunch though. The bar we were eating in was packed with young dumb morons from the convention of evil, so I allowed my voice to really project and laid out a series of attacks against pretty much everything I saw in the hall. The idle chatter at the nearby tables quieted and I received dirty looks as the fools left. My coworker's hearing should return by Monday, Wednesday at the latest. 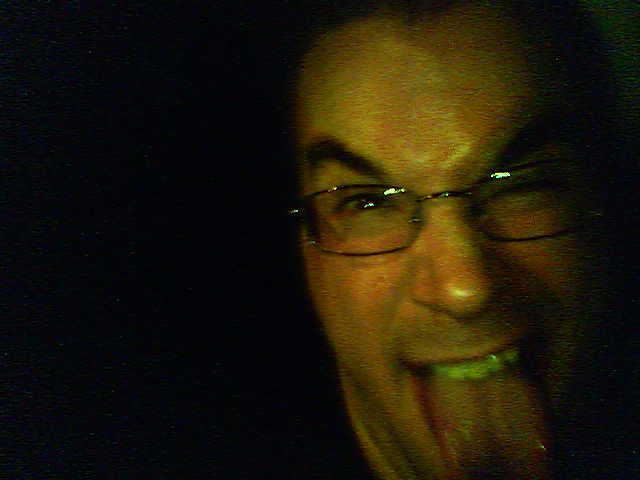 And I am the one filled with hate?

Chuckie, I am proud of you and your little man PURSE. Though, I would have been proud if you had gone off like the Chuckie we know and sometimes love.

Is that your picture?

I found it on my phone. I don't own any mirrors and neither did my rock parents, so I don't know who that is.

Hilarious. I would have definitely gotten into an argument.

You do know that advcating the behading of an image of the president will get you a visit by the nice people at the Secret Service right? With these people you can't even think such things. Also remember that they might not ask you their questions nicely. They are very likely to declare you an enemy combatant and ship you off to Cuba and not the nice part either. There you will spend a lot of time with men who ask questions for a living. If you don't behave you will end up in North Africa or some fledgeling democracy in Europe having rude things done to your fingernails and learning all about "stress positions".

Do not fuck with these people. It just doesn't even feel safe to offer those effigies for sale. Back to my rock.

we are SO-O-O-O lucky i wasn't there.

Oh yeah, Pop? What would you have done, gone out back with the McGruff dog and smooked hootch?

Ah ha ha. They would have spotted me right away (just ask pop or pinko). You look too DC professional, I'll warrant.

Oh, and I love the Gene Simmons tongue. When you get shipped off to gitmo, you can be my cell-mate.

Umm, yeah, it was sheer coincidence that Friday was the day I decided to start dressing like I had a job. I was wearing black dockers and a blue dress shirt. I should just give up completely.

Oh, rest assured, it was a compliment. In other words, you're welcome.

Anyway, if you really wanted to make it as a metrosexual Carson Kressley (name? spelling? fuck that dipshit fag...) would drool over, you need to switch from Dockers to Dickies. Carhartt's are more expensive and better made, but are nevertheless clearly in the "manual labor" category; Dickies, though cheaper and not quite as sturdy, are classy and flattering to the butt and the bolus.

In the world of pants, if they aren't fancy, then they should fade into the background. Like a ninja. Then they can chop your head off without you even noticing.

Or something. I just try to get pants that fit and go with more than one or two shirts. The colorblindness means that I stick to black.

Of late, I have seen Carhartts on men who are clearly posers and never performed manual labor of any kind. This is a little of the Harley issue for me. As in, there goes the cred.

Now I am a huge poser.

Ugh. Will posers leave me nothing? I can't even have my Carhartts in peace (and yes, I actually dig ditches and plant trees and move rocks and do manual fucking labor, yo).

Me too. Those loser DC intern jackasses. At least I haven't lost a girl to them yet. I think.