Two Things I Ruined With the Internet

There are probably more, but I stopped counting at two: Fringe, and the Hunger Games.

A few months ago, I was flipping through some links, probably on io9 or Chud, and read some article about the unanswered questions in the previous season of Fringe.  I hadn't watched any episodes before, despite my interest, and figured that I would probably not get around to it until the series ended or was cancelled in some untimely fashion.  The Old Lady and I have continued her policy of almost never checking the NetFlix queue, and one day disc one of season one of Fringe showed up.  I wasn't really annoyed by the knowledge of the few tidbits that article had given me, but then I had to look up whether Fringe was still on the air since we don't get Fox on a regular basis with our previously-urban-now-decidedly-rural broadcast antenna.  I couldn't find the information I wanted fast enough through other means, so I clicked through to Wikipedia.  Suddenly, I found myself in an Arrested Westeros moment: I've made a huge mistake.

The truly moronic aspect of this story is that I ruined The Hunger Games in EXACTLY the same way about two months prior, and had resolved not to research anything I wanted to consume on Wikipedia.  Books, movies, foods, etc, everything can be ruined forever.

The Hungus Games are probably in production now, or may even be available on Pay Per View at your local hotel.
Posted by Chuckles at 12:05 PM No comments:

Email ThisBlogThis!Share to TwitterShare to FacebookShare to Pinterest
Labels: movies

Email ThisBlogThis!Share to TwitterShare to FacebookShare to Pinterest
Labels: air guitar, awesome, guitar hero, it's not all about me even when it is, war of the beard, WORSHIP THE GENIUS 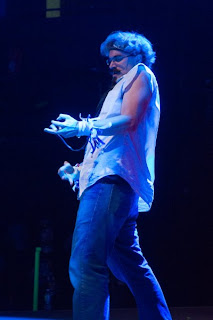 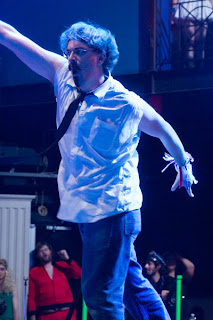 Both photos are from OnTap Online Gallery.  Since the photos are of me, I'm going to assume that it perfectly legal to use them.  If not, I've dealt with lawyers before.

So for next year, I'm aiming for two things: a six pack (instead of the mini keg) and a possibly fake giant mustache across my shoulder blades for maximum impact when I do some sort of spin-kick/guitar flip.  Probably skinny jeans as well.

The oddest part of the evening was being asked, "hey, you're the guy who really knows how to play guitar right?  I heard you're actually good at it."  My response was, "Uh. No. I've held a guitar, and made noise come out of it, but there is no way you would ever call me good at it."
Posted by Chuckles at 9:23 PM No comments:

Email ThisBlogThis!Share to TwitterShare to FacebookShare to Pinterest
Labels: air guitar, war of the beard, WORSHIP THE GENIUS

Time for Another Fifteen?

I hope to surprise my father with another brief bit of in/fame on June 23.  The Genius is taking the stage at the 930 Club.  Without an instrument.  Ahem, without a visible instrument.  I am competing in the DC Regional of the US Air Guitar Competition under the nom de air of Rockstache.  If you can make it, you better cheer for me.

Two of Genius Cousins have played the 930 Club, but they were in punk bands.  Actual bands, with instruments and other people and stuff.  I have this odd feeling they will not appreciate my performance.
Posted by Chuckles at 11:26 PM 3 comments: