This is not a story about my poo. This is a story about a time I needed to poo but was forced by events to hold it for a long walk. Post inspired by Unlawfully Wedded Wife.

It June 2005 and I was wandering around Hains Point with a friend1 about to leave for the Peace Corps. It was a lovely night, just the right temperature for walking around and not humid yet. We were talking about whatever and checking out the half buried titan
when I got the idea that maybe I needed to find a bathroom.2 We take the photos that my friend wanted to take and then we proceed walking along the river heading back into the city. About half an hour later, I was in dire straits and my friend asked me if I was ok. I suggested we stop at the Jefferson Memorial and get some nice night photos of it and I would hit the bathroom there. It was pretty close and I figured that was a good cover. 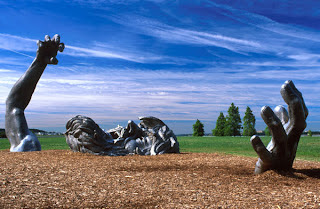 When we got there, I asked a guard for the bathroom and he told me there were closing in five minutes. Not a problem. I had to ride the slowest elevator in the universe down one floor to the gift shop and bathrooms. I hustled over to the door in a struggle to move as fast as possible but without disturbing my bowels any more than necessary. The sight that greeted me upon pushing open the bathroom door will haunt my nightmares forever.

Someone had taken an enormous shit in the middle of the floor. I have seen some major turds in my day, and produced most of them, but this turd still makes me feel inadequate as a man. It was smeared all over the floor, too. I think some lunatic had tried to write something on the floor with his/her enormous pile. There were streaks and swirls that I associate with some form of hieroglyphics, New World or Old, or possibly cuneiform. Could have been cursive. I was shocked into stillness and my eyes meandered across the floor trying to process this rectal rorschact. I have never quite experienced a moment of complete mental stillness. It was the neural blue screen of death.

Then the stench hit me a mere second later like a supernova. The olfactory explosion was so potent I recoiled, rebounded, flew backward like a character in a silly action movie caught in the blastwave of some bomb, arms raised futilely in front of my face, itself expressing a revulsion so deep that cenotes look shallow.3 The scent was almost alive in the way that it chased me out of the gift shop. In less than a second, it had permeated my clothes to the point that my friend noticed it when I finally got back to street level. I said only, "It's not me." I found that now pitied guard and told him that someone had "violated" the bathroom and that I had been completely unable to use it and that I was deeply sorry for him. He said that he'd check it out. A few blocks away from the memorial, I swear I heard a wail of terror and fear echoing through the air.

My friend and I were now in the dead zone. The dead area downtown that closes at 8 pm and in which there are few buses, no cabs and no metro stops. We had a choice, walk three blocks to a 30 to 40 minute metro ride (most of that would be spent waiting) or walk for 30 to 40 minutes to my friend's apartment. We took the latter choice. I was now debating the relative merits of just dumping my load in a bush, but refused that option because I was not out camping.

I was now an hour overdue for my porcelain rendezvous and was hurting. I was sweating from the effort of keeping the iris closed. I was nervous because I knew the coming blowout was likely to permanently disfigure my friend's bathroom. I was still feeling the nauseating effects of the defiled bathroom.

I managed to hold it together and make it to my friend's apartment unsoiled and even managed to let her use the bathroom first. In even dire need, I'm still a gentleman. Besides, it gave me a chance to turn on her stereo really damn loud.4

1 Okay fine, I admit it. She was my girlfriend. Are you happy now? You're MARRIED!?! What the fuck? Wow. What the hell. Fucking everybody I know is married.

2 After years of world travel and eating odd foods, I know that when I get certain feelings I will need a bathroom in 20 minutes, 1 hour, etc and exactly the kind of episode it will be. This is an unebelievably helpful talent when you are driving through eastern Europe or Africa. Anywhere, really.

3 Later cultures would sacrifice virgins down the pit of my expression.

Email ThisBlogThis!Share to TwitterShare to FacebookShare to Pinterest
Labels: not fun, poop

Mr. Turtle was touching cloth? As boston is a city of few public restrooms, I know that pain. I love that you turned up the radio.

Also, why is it that so few people re content to merely shit on the floor. I was a janitor in college and it made me wonder, what is wrong with these people? I mean, why must they run their fingers through it? it is just SO WRONG.

I thank Frank Black for getting me through those days

I had doubts about this story, given the headline, but it delivered. Poor Thomas Jefferson.

I couldn't read the whole post because I don't read about certain things.

However, not EVERYONE is married. Um, hello?! When you become as tragic as AG, you can complain.

I'm familiar with the "date clench" but this story is priceless. I almost fell off my chair laughing. Not a good thing at work - but thanks. I really needed a good laugh.

I think you spelled rorshat wrong.

What a nice surprise that must have been for those on a trip to our nation's capitol.

"Children, Thomas Jefferson was our 3rd President. Try not to step in the shit."

hil-lar-ious. what a good and well explained story. your descriptions are a riot!

I dropped you an email. Let me know if it works to get together in DC.

When I worked at a grocery store in high school, I walked into the bathroom and saw that some asshole had left a Jackson Pollack all over the toilet. It was like he had made it 98% of the way home and just couldn't wait that last 2%. What was awesome was that I had just been promoted to the dairy department from being a bagger, and I got to tell some other poor sap he had to clean the bathroom. That boy was never the same.

And that, my friends, is why God invented status. So you could laugh at some poor schmuck who has to do the job you almost had to do.

It was more like being in combat: I felt really bad for the guy who had to bite the bullet, but I was so happy it wasn't me.

It is truly horrifying to walk in on such a mess. I don't really think you're ever the same after that. My incident happened almost a year ago and well, lets just say that my imagination just won't let it go.
Glad to have been an inspiration!

It has been a couple years for me as well and pity that poor guard.